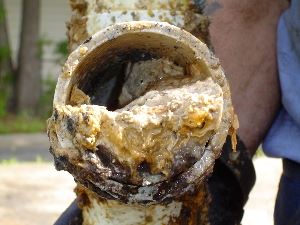 The City of Lawrence Water & Sewer Department, in partnership with the Mayor’s Health Task Force, has implemented a new Fats, Oils, and Grease (FOG) Control Program. The aim is to reduce sewer backups, sanitary sewer overflows, and other public health hazards caused by FOG accumulation in the public sewer system.

FOG refers collectively to the fats, oils, and grease found in most residential kitchens and commercial food service establishments. Some foods containing FOG include cooking oil, meat fats, butter, other dairy products, and baked goods. While some of these may seem harmless as they enter the sewer system in liquid form through sinks, dishwashers, and garbage disposals, these substances solidify as they cool and stick to the insides of sewer pipes.

Over time, FOG builds up and completely blocks these pipes, causing raw sewage to overflow into streets and streams, or to back up inside a restaurant. This can have a hugely detrimental effect on communities, as the public relies on strong sewer infrastructure for overall health. Not only does FOG cost public works departments in infrastructure repairs, but also raw sewage flowing into the water supply significantly increases the possibility of drinking water contamination, yielding to other potential public health concerns.

As part of the FOG Control Program, the City of Lawrence has adopted a FOG Ordinance in Title 8, Chapter 8.32 of the Revised Ordinances to control the discharge of FOG into the public sewer system. Beginning in 2016, food service establishment owners must take the following actions to comply with the FOG Ordinance:

Applicants for an annual Food Establishment Permit must comply with the new FOG control requirements in order to complete the permit renewal process by the May 31, 2020 deadline.